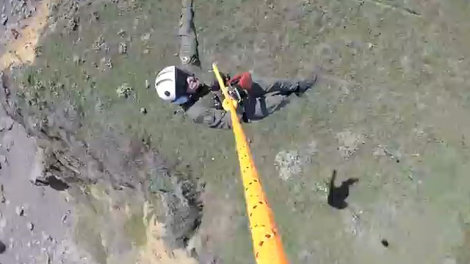 Credit: FriendsOfHenry1
[/caption]In the city of Santa Rosa today, a black Labrador named Oreo, can honestly claim the title of “Luckiest dog in California,” all thanks to the very brave efforts of some extremely dedicated rescue workers from the Sonoma County Sherriff’s Office.

Separated from his owner, Oreo mysteriously found his way more than half way down an almost 100 foot cliff along the Pacific Coast. Despite efforts by owner and numerous passer’s by who began to gather, the dog could not find his way back up to safety. Stuck, sitting perched on a shaky ledge that measured less than one yard in length, Oreo seemed to be paralyzed with fear; unable to move in any direction, the black Labrador was facing certain doom by the pounding surf below.

Unseasonably warm weather called beachgoers out for leisurely activities. Many who spotted Oreo’s predicament tried to entice the pooch up to safety. As their efforts were unsuccessful, several cell phone calls were made to 9-1-1.

Sonoma County’s Helicopter Rescue, also known as Henry-1, was called into action. Henry-1’s crew members have rescued many dogs over the past few years. Their crew has received specialized training for working with stranded, often terrified, and sometimes dangerous, dogs. The helicopter pilot explained that not only is there an element of danger in trying to rescue a trapped animal, but many times people can get involved, and often put themselves in jeopardy, as they themselves may attempt a rescue.

Directing the helicopter over Oreo’s position, the rescue worker skillfully lowered a rope, securing it on the dog’s harness, allowing the dog to be lifted to safety. As the tense scene was being watched by the crowd, applause and cheers broke out as Oreo was picked up, flown, and lowered to safety.

Oreo was reunited with his owner.