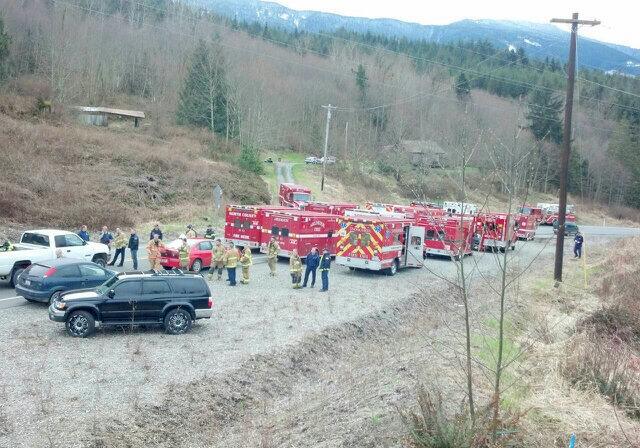 A mudslide in Washington destroyed a house Saturday morning.
Washington State Patrol[/caption]Rescue teams have been working steadily since a mudslide struck Washington state on Saturday at 11 AM. Voices of injured victims could be heard from workers below the debris that was left after the incident. The team acknowledged that they were taken extreme risks, but that their mission was ongoing since there were still individuals at the scene who needed help.

Two people had been killed instantly at the scene while another victim was pronounced dead later at a nearby hospital. Several people were left in critical condition, including an infant and an elderly man. The mudslide also left at least six homes completely destroyed.

Individuals were told to evacuate the area because the North Fork of the Stillaguamish River had become blocked. As a result of the blockage, water levels of the river were rising dangerously high. The police were concerned that severe flooding would occur if the water was able to suddenly break down the barrier. The landslide, which was 135 feet wide and 180 feet deep, also completely covered Route 530 near Oso, a town located 55 miles from Seattle.

The rescue team sent individuals with severe injuries to Cascade Valley Hospital. A local Red Cross was set up at the hospital to offer support and comfort to individuals who needed resources following the tragedy. In Arlington, a rescue shelter had been formed at Post Middle School.

Paulo Falcao, a witness at the scene, described the mudslide as "Darkness coming across the road." "Everything in the area was gone in sixty seconds," he told the Daily Herald.