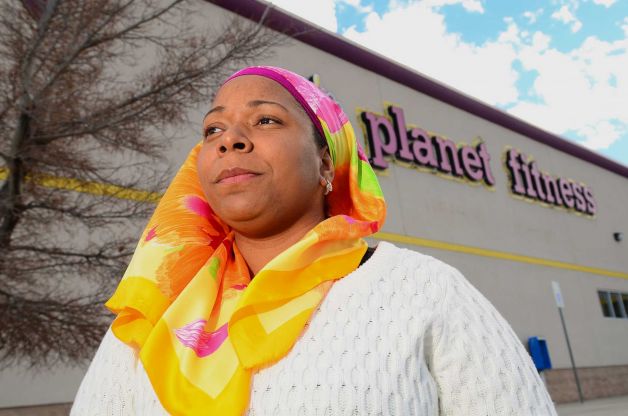 Albuquerque, New Mexico - Tarainia McDaniel, age 37, joined planet fitness back in 2011 and initially signed a two-year contract. All was well and fine for the young African American Muslim woman who wears a scarf on her head in traditional fashion for women of her faith. All was well, until she moved and began attempted to enter a new location. She was denied entrance because her Muslim head scarf was considered a violation of the dress code for that location which bars entry to patrons wearing skimpy clothing, jeans, boots, and bandannas. The later article of clothing is closely associated with Cholo gangs and biker gangs.

Mrs. McDaniel explained that in her case the article of clothing was tied to her religious faith. When denied, she offered to wear a traditional Muslim "hijab", but was also denied. Now, McDaniel has filed a lawsuit against Planet Fitness and they have countered that they had doubts that the head apparel served a legitimate religious rpurpose. Really? Did they expect Mrs. Daniel to provide a baptismal certification or other type of religious document proving her Muslim affiliation?

For their part, corporate offices of Planet Fitness affirms their respect for the religious rights of their patrons and employees. Planet Fitness pitches themselves as the place people go to get an honest work out without the intimidation of patrons who are better fit. To that extent, they rely on a somewhat strict dress code which they leave at the discretion of local management to enforce. It is that "discretion" which may end up being scrutinized if the lawsuit goes to trial. Mrs. McDaniel is alleging that by denying her entry because of Muslim head covering, they violated her rights under New Mexico's New "Human Rights Act and the Unfair Practices Act". It is not clear what compensation Mrs. McDaniel is seeking in her lawsuit.