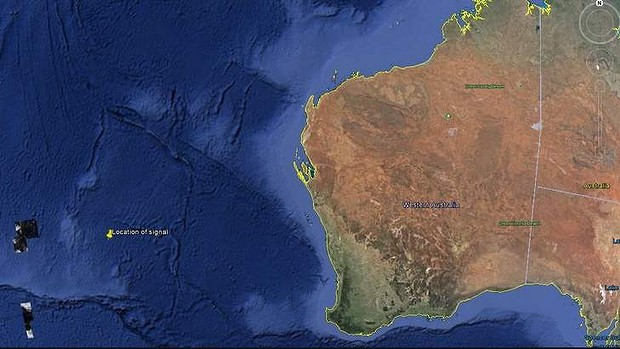 Southern Indian Ocean - The multinational search for the missing Malaysian Airlines flight continues. The Australian government is spearheading the search efforts. Authorities are now saying that the Chinese cutter Haixun 01, a vessel which is part of their coast guard fleet, has picked up on a pulse signal. In all, this now makes the number of times a pulse signal has been detected total three.

The Haixun 01 detected the signals within a two kilometer radius of each other. An Australian vessel called "The Ocean Shield" also picked up a pulse signal, but the location of that was not in the same vicinity of what China reported.

As per the Haixun 01's signal, the news was not released or confirmed by Australian authorities, but rather the newspaper Xinhua.

Details are that the frequency being used 37.5 Hertz which is significant because that is the same frequency used by airplane flight recorders or black boxes as they are known. At a press conference in Perth, Australia, Chief Coordinator Angus Houston stated that all three reports of pulse signals are being afforded full consideration and attention.

That said, Houston made the same pronouncements that Chinese and Malaysian authorities made which is to caution against rushing to any conclusions. The reports, while credible, have not been confirmed to belong to the missing airliner.

Truth be told, false pulse signals can and do occur. A wide variety of causes can generate what appears to be a pulse signal such as noise from other sea vessels, whales and other forms of sea life. A recent pulse signal detected by the British Royal Navy's E.M.S. Echo picked up just such a false pulse signal last week. It should be noted that when a ship announces they have picked up a pulse signal, all that has occurred is for signal to be recorded. The signal alone has no accompanying means of verifying its authenticity.
[caption id="attachment_82518" align="aligncenter" width="620"] The location of the signal picked up by Chinese ship Haixun 01 is southeast of the official search areas for MH370. It is at 25 degrees south latitude and 101 degrees east longitude. Photo: Google Earth
[/caption]