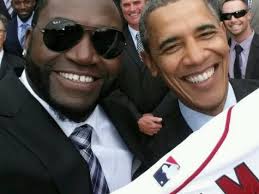 White House Not Cool WIth Ortiz-Obama Selfie[/caption]Samsung's recent marketing of a popular selife has the White House unhappy. The electronics company and manufacturer of the popular Galaxy line of smartphones has been using celebrity selfies as a marketing tool, but the White House did not like that they use an image of President Obama with Boston Red Sox star David Ortiz to market their brand, reports CNN.

Players from the 2013 World Series champion Red Sox team visited the White House earlier this week to celebrate their championship with the president. Ortiz presented the president a personalized Red Sox jersey and then initiated a selfie, taking out his Samusung Galaxy Note 3 and snapping a picture of himself with the president.

After Ortiz tweeted the picture to his followers on Twitter, Samsung re-tweeted the image to its five million followers. It was the re-tweet that went too far, White House press secretary Jay Carney said. "The White House objects to attempts to use the president's likeness for commercial purposes," he said.

Ortiz is a paid spokesman for Samsung and claims the selfie with the president was spontaneous and Samsung did not know about it ahead of time. However, a Samsung spokesperson told the Boston Globe that they instructed Ortiz about how to share images with fans after learning of the upcoming White House visit.

Samsung's selfies have been getting a lot of attention in recent weeks. It was a Samsung smartphone that Ellen Degeneres used to take selfie of herself with several celebrities at the Oscars. It was the most re-tweeted image of all time, Twitter reported.

White House officials were mum on whether they would be seeking legal action against Samsung for the presidential selfie. Kate Middleton Wears Same Dress As Another Guest At Wedding